this post is recycled from a few years ago 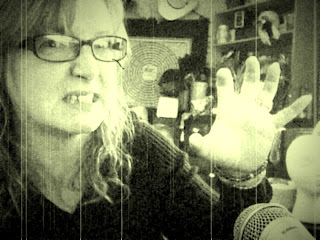 I know people from all walks of life. Pagans, Christians, Muslims, Atheists, Agnostics, Hindus, Buddhists... I like and respect them all. We are each endowed with free will to choose our path in life. For my tolerance, I ask for tolerance in return.

I choose not to celebrate Halloween. However, I don't care if you celebrate it, Samhain, The Day of the Dead, or any other festival common to this time of the year. Go for it...I want ya to. But I'm not going to.

I pulled the following from history.com:

Halloween's origins date back to the ancient Celtic festival of Samhain (pronounced sow-in).

The Celts, who lived 2,000 years ago in the area that is now Ireland, the United Kingdom, and northern France, celebrated their new year on November 1. This day marked the end of summer and the harvest and the beginning of the dark, cold winter, a time of year that was often associated with human death. Celts believed that on the night before the new year, the boundary between the worlds of the living and the dead became blurred. On the night of October 31, they celebrated Samhain, when it was believed that the ghosts of the dead returned to earth. In addition to causing trouble and damaging crops, Celts thought that the presence of the otherworldly spirits made it easier for the Druids or Celtic priests, to make predictions about the future. For a people entirely dependent on the volatile natural world, these prophecies were an important source of comfort and direction during the long, dark winter.

To commemorate the event, Druids built huge sacred bonfires, where the people gathered to burn crops and animals as sacrifices to the Celtic deities.

During the celebration, the Celts wore costumes, typically consisting of animal heads and skins, and attempted to tell each other's fortunes. When the celebration was over, they re-lit their hearth fires, which they had extinguished earlier that evening, from the sacred bonfire to help protect them during the coming winter.

By A.D. 43, Romans had conquered the majority of Celtic territory. In the course of the four hundred years that they ruled the Celtic lands, two festivals of Roman origin were combined with the traditional Celtic celebration of Samhain.
The History of Halloween.

The first was Feralia, a day in late October when the Romans traditionally commemorated the passing of the dead. The second was a day to honor Pomona, the Roman goddess of fruit and trees. The symbol of Pomona is the apple and the incorporation of this celebration into Samhain probably explains the tradition of "bobbing" for apples that is practiced today on Halloween.

By the 800s, the influence of Christianity had spread into Celtic lands. In the seventh century, Pope Boniface IV designated November 1 All Saints' Day, a time to honor saints and martyrs. It is widely believed today that the pope was attempting to replace the Celtic festival of the dead with a related, but church-sanctioned holiday. The celebration was also called All-hallows or All-hallowmas (from Middle English Alholowmesse meaning All Saints' Day) and the night before it, the night of Samhain, began to be called All-hallows Eve and, eventually, Halloween. Even later, in A.D. 1000, the church would make November 2 All Souls' Day, a day to honor the dead. It was celebrated similarly to Samhain, with big bonfires, parades, and dressing up in costumes as saints, angels, and devils. Together, the three celebrations, the eve of All Saints', All Saints', and All Souls', were called Hallowmas.

Many holidays have similar beginnings. It is my choice to not celebrate.

It's Not an Original Idea but Hey, It's Good to Share, Right?

I was reading one of my favorite blogs today and I realized that many blogs do something I rarely do, which is Share other Blogs and Websites! Yes, I have a sidebar with some of my fave blogs, but I don't share them too often in actual posts.

So Today I will break my silence and share:

Aunt Peaches is hilariously funny and mega creative, two of my most favorite attributes.

Just Something I Made features free downloads of awesome graphics to decoupage or scrapbook with.

Go sign up at Ravelry to interact with knitters and crocheters around the world. They have more free patterns than you could possibly make in three lifetimes.

Skull A Day....well what can I say? I love this blog so much I get it sent straight to my email.

This is but a small sampling of my favorite things. More to come, if I can just remember to do it.
Posted by Rebecca Halley at 10:05 AM 1 comment:

I don't usually type much when I blog these days, preferring to use the visual stimulus of pictures. But today I'm tired of my pictures, tired of seeing the same things over and over because I have been taking orders for things I have already made before and I've rearranged my stash twenty times and oh how I long for this Holiday gift giving season to be over with already so I can move on to my "Next Big Thing".

What's that going to be, you may ask yourself.

Truth be told, I am not sure.

Here are some ideas I am kicking around though:

Any suggestions will be considered carefully. Now go make me some cookies I'm hungry.
Posted by Rebecca Halley at 12:58 PM 1 comment:

Fun at the Gordyville Flea Market

Sharie picked me up at the Chinese restaurant and took me to Gordyville, a big indoor flea market today. There weren't a whole awful lot of vendors but we saw some cool stuff. 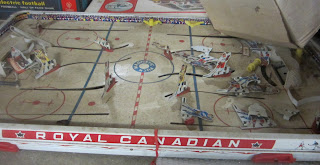 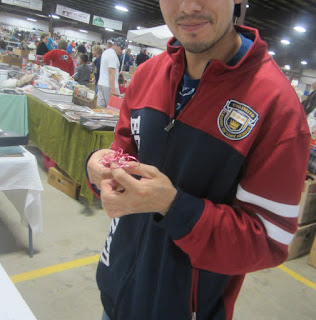 This dude was making wire sculptures 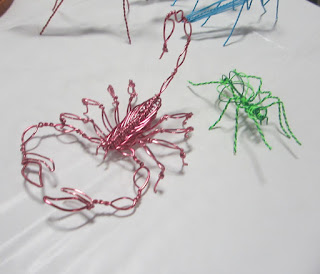 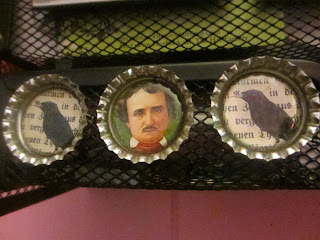 Poe for my BFF Leslie 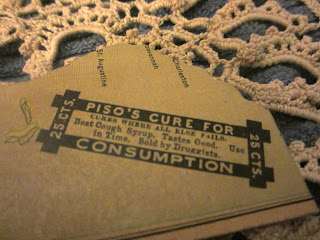 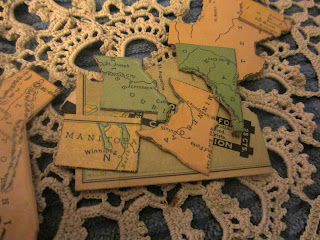 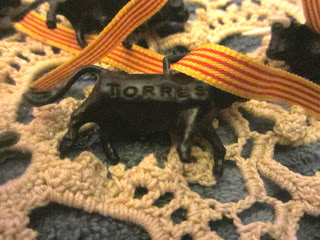 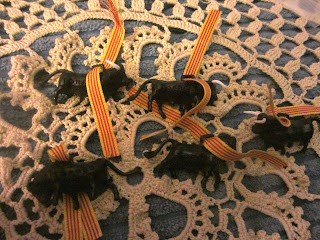 I also got a Brownie camera for my photo booth and I bought the vintage doily you see here.

Starching and Stretching A Doily

I finished a doily while sitting at the hospital with a friend today. I decided to have Sadie help me starch and pin it out while photographing. 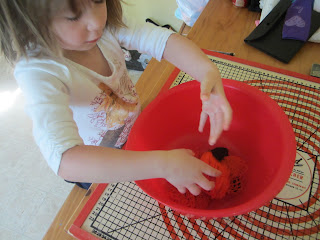 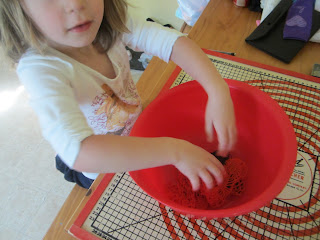 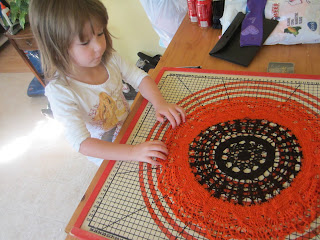 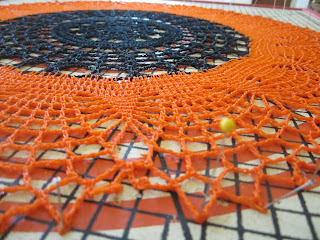 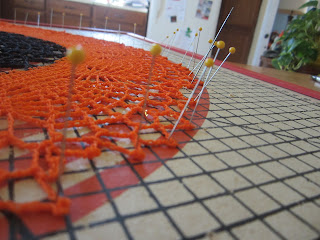 I used just a touch of water in some Sta-Flo starch. Squeeze mixture through doily and then squeeze it back out. Spread out on table or in this case, a doily board. Pin evenly around, pulling out points. Let dry.

It will look something like this when finished. (Same pattern different color configuration) 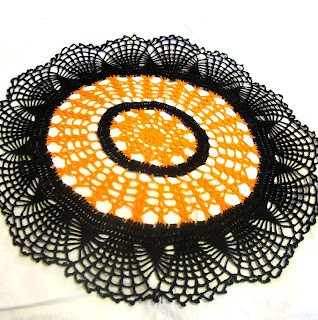 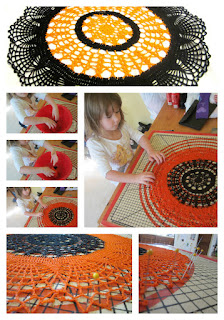 Can you do me a favor and pin this collage picture on Pinterest?

Trying to Get a Plan

Wow what a week! The orders came in along with the cold weather. I added more items in my online stores, took a day off to go to Springfield and tried again to clean my room (fail). Here's what I am working on:


That's about it and trust me that's enough. I'm thinking two weeks at least. 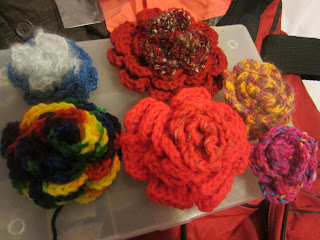 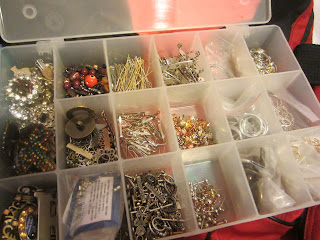 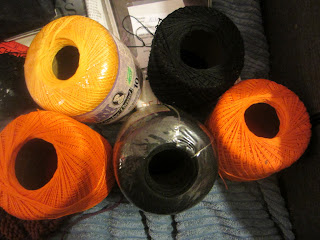 Denise, who wanted the Rose Doily #7.

I used the random generator on Random.org to pick from the 27 entries.

I have already received a response from Denise so I'm calling this one done. Thanks everyone who commented and stay tuned for more giveaways! 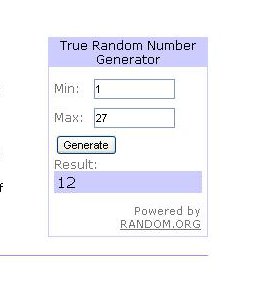 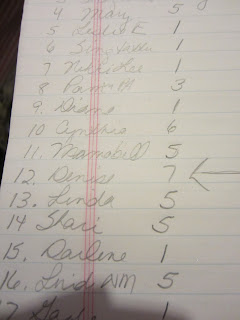 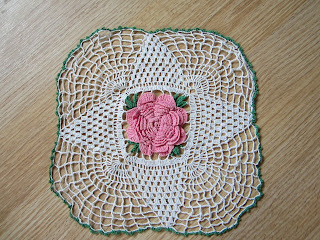