One of my favorite sellers on etsy.com is hosting a Steampunk Ring giveaway. Head on over to their blog http://steampunkrings.blogspot.com/ for details. If you win you can send the ring to me lol!
Posted by Rebecca Halley at 9:59 AM 3 comments:

Living with an Alcoholic and Smuggling Sweetcorn 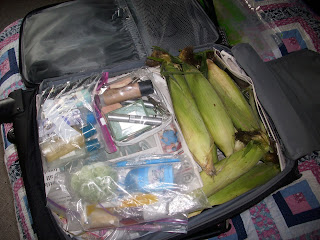 Jack's nephew, Kyle, has been here since July 5 or so. He's a raging alcoholic and the family back home had hoped we could help him. We couldn't. He doesn't want help. Tonight I had it out with him because he wanted his last $100 to go party on. Hey, I can't pay my bills and you want to go party AGAIN?!? What's wrong with this picture? I have watched him piss away $1600 in five weeks. It's not fair and I'm about to blow up. Of course Grandma is coming to rescue him Friday so I guess I should just be relieved, but truthfully I am hot, hot, HOT under the collar about the whole thing. He was in the backyard being belligerent on the phone to his pregnant girlfriend, Emmy, at the top of his lungs at midnight last night. He slept all day while Jack and I did yard work until he got up and went swimming. Then he came home and took a shower...uh don't they have showers at the damn swimming pool? No, no that's OK, keep running our bills up...it's what you do best....ARGHHHHHHHHHHHH!

On a lighter note, you know you're from Illinois when you put sweetcorn in your checked luggage on the flight home.
Posted by Rebecca Halley at 8:32 PM 1 comment: