Library Nazis or How I Found my Library Card

So remember how yesterday I was whining about losing my library card? You see the reason that I knew my card was missing was because I decided I should check my library books to make sure none of them needed renewing. I usually do this on my phone so I pulled up the SHARE website and immediately discovered that when I uninstalled updates on my Chrome  it wiped all my saved user names and passwords Yikes.


"Oh well, I'll just get my library card and type in the numbers again" she said, not knowing what heartache was soon to come.

After I gave up the search and discovered it was too hot to walk to library, I worked on the big quilt for awhile (it's coming along smashingly) and played in my art journal. Later in the day I still needed to check my books for past dues. I remembered that I could get the numbers from the laptop browser, so I did and logged in. And there were the words I have seen way too many times since I moved to this fair city. 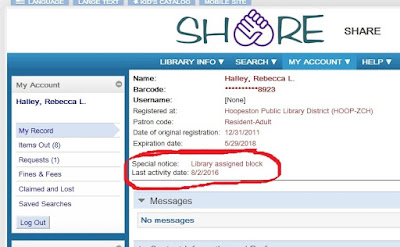 What did I do now? Every time I turn around I'm getting blocked. Seriously? WHAT DID I DO NOW?!? I CAN'T EVEN FIND MY LIBRARY CARD!

I have had nothing but grief from a core band of Library Nazis since last year. When I told them I moved and my Ameren Online Acct wasn't good enough for them for proof of residency. Even though I held a valid library card from them. Even though I was there everyday almost since I didn't have internet yet. One day I was borrowing books, placing holds and using their computers and the next day I was blocked from every bit of it. I was pissed miffed but it got worked out eventually. All was until the next week when I tried to download an audiobook from MyMediaMall and found out I was blocked again. Same reason- no proof of residency even though I settled the matter with the Director...

They reversed the block right away but I was still pissed miffed. (I am leaving out bits and bobs to save myself some high blood pressure.)

Soon after this I damaged a book and wanted to pay for it but I didn't want everybody and their brother to hear me tell the story so I made this gesture towards the Director.


Evidently she's from a foreign country where that is an obscene gesture instead of the innocent gesture of "Come here please and don't draw attention to the fact I need to talk to you" like I have used it my whole life. She was furious and told me never to disrespect her or her staff ever again. Then she said it again. I stood there with my mouth open and finally sputtered "I spilled water on a book and want to pay for it" She calmed down but I was still in shock three days later. I thought this woman was on my side. She had called and apologized for her staff and then helped me get the residency thing straightened out. I was beginning to question my sanity.

Not all the librarians were hateful. Some were very nice and helpful. But those few who wielded their powers like Hitler and his henchmen...Ever since those early days of September last year they have been The Library Nazis. That's how I think of them and that's how I speak of them. They ban people right and left. They make sure less and less people come to the library by their actions. (Some people go anyway, like me, just for the sport of it now lol)


I guess one reason it hit me so hard was that I have been a heavy library user since about 1992. H.E.A.V.Y. I home schooled my sons and relied on the Lincoln Trail Library System for loads and loads of books and videos. I had a card In Glen Elyn up by Chicago after that then one in Colorado Springs for 6 years before I came back and had one in Rantoul and Danville before moving to Rossville and getting my present card.  But these people act like I had never had a library card in my life, like I am siding with AL-Queda and like I am simply not to be trusted. Did they even look up my record? Did they bother to find out I always return my books and pay my fines if  happen to get one? I watched a man who just got out of prison get a library card at the Champaign Public Library who got more respect and trust than I have with these people.

I bet you are wondering where this story is going.

Back to the problem at hand. I thought maybe I had a fine or something to cause the dreaded block this time so I checked. 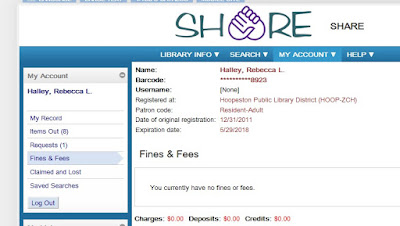 Nope no fines or fees.  Hmmmmmm I better call them...

Well guess why I am blocked even as we speak.

I left my library card at the library when I picked up some holds. They didn't call me, they didn't text me, they BLOCKED ME! They didn't leave me a message online when they did the blocking either. 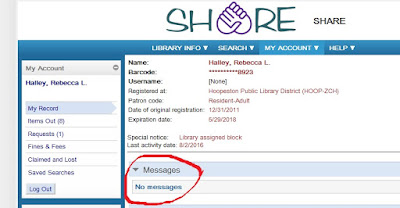 I'm really curious about why this happened. Can't wait to get some time to go to main desk.

E.T.A. Friday Aug 5 -I got my card back- It is indeed their policy to block people if they leave their card there. It was one of the nice librarians who told me this. I told her it was very unsettling to get blocked for such a reason. I think she agreed but she has no power in the Nazi Regime so she just smiled a sad smile and nodded.
Posted by Rebecca Halley at 9:44 PM

Email ThisBlogThis!Share to TwitterShare to FacebookShare to Pinterest
Labels: give me back my card, library, library nazis